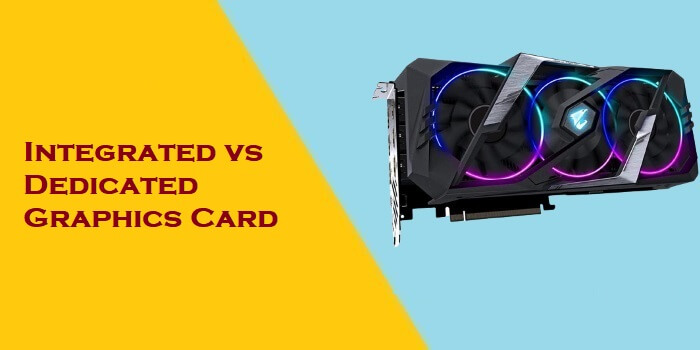 The choice between graphics cards is a bit tough! You might be questioning which one is better? An integrated one or a dedicated graphics card?

Worry not; we are here to clear all your doubts. There are some important aspects that you should consider while opting for a graphics card. So we present to you 7 Things You Need to Know About Integrated vs. Dedicated Graphics Cards.

Keep on reading to explore everything about Integrated vs. Dedicated Graphics Card.

Integrated vs. Dedicated Graphics Card: 7 Things You Need to Know

So first things first, you have a choice between two types of graphics cards for your PCs they are – dedicated and integrated.

The dedicated graphics card uses its own hardware, hence, is a more popular option and more people incline towards it. To put it simply, it’s the first choice of any user.

Coming to The second option, that is, an integrated graphics card, well it’s more like a second option to people. This is because it borrows resources from the rest of the PC.

Now one thing that you should understand is that both these graphics cards are resourceful. Each surpasses the other in some ways, both having some plus as well as minus points.

But if you are someone who knows very little about this, let’s learn more

What Is Integrated Graphics?

A device with integrated graphics has the graphics processing unit (GPU) built into the same die as the CPU.

Integrated graphics had a poor name in the past, but that has changed rapidly in current decades.

But It has a number of advantages now. It’s compact, low-power, and far less pricey than a dedicated graphics card.

It is indeed already more than capable of general computing, like some casual games and 4K video streaming but it also has some shortcomings.

It isn’t designed for use in graphically intensive systems. Although playing the most recent high-end games is also available, there are some great games with integrated graphics that you can enjoy.

Another thing to keep in mind is that integrated graphics uses the same memory as the rest of the machine. For this function, it’s often referred to as shared graphics.

You’ll only have 3GB of memory usable for general programming activities if your machine has 4GB of RAM and 1GB of shared graphics memory.

Mostly on devices where portability is a priority, such as laptops, tablets, and smartphones, shared graphics are often used as the alternative. It’s also available on low-cost desktop computers.

A GPU is integrated into the majority of modern processors. The software can seamlessly switch between the two on computers that also have a dedicated graphics card. It aims to strike a balance between output and productivity.

2. What Is a Dedicated Graphics Card?

A dedicated card is a type of hardware that controls a computer’s graphics performance. Video cards and discrete graphics are some other names for them.

Dedicated graphics cards have the advantage of being able to do any job adequately. They don’t share the memory with the rest of the device, and they’re simple to upgrade in most situations. On the downside, they’re more costly, bigger, and produce a lot of heat.

Graphics cards come in a variety of shapes and sizes, but they all have a GPU, RAM, and a cooling fan in common.

The dedicated graphics performance of the 8th generation Intel Core i7 processors is the highest. AMD Radeon RX Vega M graphics are used in these devices.

According to the benchmarking site videobenchmark.net, the Vega M performs similarly to the dedicated RX 570 which is a mid-range graphics card that costs about $199.

Under the mid-range Iris Pro and entry-level Intel HD brands, other i7, i5, and lower processors have integrated Intel graphics. The best Iris Pro graphics system performs at around a third of the Vega M’s speed.

The best dedicated graphics cards, such as the Nvidia Titan Xp series, have over twice the value. The shocking part is that they are more than a thousand dollars in price.

But with the best quality graphics, here’s a downside to dedicated graphic cards-they heat up a lot. Now you know exactly why dedicated graphics cards have built-in fans. The fans act as a cooling and coping mechanism

Under heavy load, the Titan Xp can reach temperatures of 185 degrees Fahrenheit or higher, according to studies. That is like an addition on top of the heat produced by the CPU as well as other components within the device. It’s important to keep the computer from excessive heat.

In contrast, while gaming, an Intel Core M processor with integrated graphics could reach a maximum temperature of around 160 degrees. Also keep in mind that there is no fan, which saves a lot of electricity.

Benchmarks reveal that this setup’s graphics output is comparable to that of a dedicated card from many years earlier. However, if you’re not a gamer and respect energy conservation, it’s probably a safer option.

If you didn’t know about this, well you are welcome. Dedicated Graphics Laptops Exist and they are a great choice.

Laptops with dedicated graphics cards are available, but your choices are constrained A larger size and a higher cost are the deal-breakers.

Laptops with integrated graphics, such as the Dell XPS 13 or the Acer Swift 7, are just about half an inch wide. A Dell model with a similar depth adds about a quarter-inch to the depth. The Asus ZenBook 13 claims to be the thinnest laptop with dedicated graphics at 0.55 inches.

The majority of laptops with dedicated graphics are either gaming laptops or high-end workstations. Because of the wider footprint, 13-inch models are uncommon, with 15-inch models being more popular.

Now with all that being said if you feel like you don’t want to compromise on size but still wish to lay your hands on the best ever performance? Then worry not, there is a third, lesser-known choice: an external GPU.

But in some cases, they aren’t the cheap option. Apple, for instance, uses integrated graphics in all its models but not in the 15″ versions of the MacBook Pro. Which makes it one of the most expensive devices in its range.

In what you might call the “entry-level” edition of the iMac desktop line, integrated graphics are also available. It’s already more than a thousand bucks.

This isn’t to say individual graphics aren’t costly. There are some great graphics cards on the market for a low price.

Shared graphics is undoubtedly the budget choice in desktop computers from other suppliers, where you have far more flexibility to customize and update the machine. A decent mid-range graphics card, such as the Radeon RX 580, would also add a few hundred dollars to the bill.

7. Dedicated Graphics Is Better for Gaming

Even when shared graphics is less powerful, it still does not imply that you can use them for gaming.

Steam, the online gaming website, publishes a monthly poll of its 125 million users’ hardware. The August 2018 list is dominated by dedicated graphics cards. However, Intel’s integrated graphics was used by more than 10% of customers.

You will have to make some sacrifices if you follow this course. You won’t be able to play any game, and you’ll have to reduce the detail settings. In most cases, 4K gaming is out of the picture.

Intel has a guide to selecting the proper settings for different games on its website to help.

Now let’s move on to the concluding part of this integrated vs. dedicated graphics card battle. We hope that now your priorities are set in stone. So now you can easily choose the right graphics card for yourself.

For serious gaming and VR, you’ll need a dedicated graphics card, which is much better if it has CUDA cores. One is also required for advanced graphics software work, such as animation, CAD, and video editing.

Modern graphics cards are supported by programs like Photoshop and Lightroom. These are mandatory for activities such as 3D modeling and will speed up RAW photo editing.

Then again if you are into mining bitcoin and other cryptocurrencies then it would also need a strong dedicated GPU.

For the rest of us, integrated graphics would suffice. It’s suitable for casual gamers. And For most Adobe systems, it’s more than enough. With a modern processor, handling 4K video is no big deal.

So this was all about Integrated vs. Dedicated Graphics Cards and the 7 Things You Need to Know about it. If you have made it till here then you are now ready with all the information you need.

While buying a new graphics card, remember everything and buy the card that would be beneficial to the work you carry out mostly.