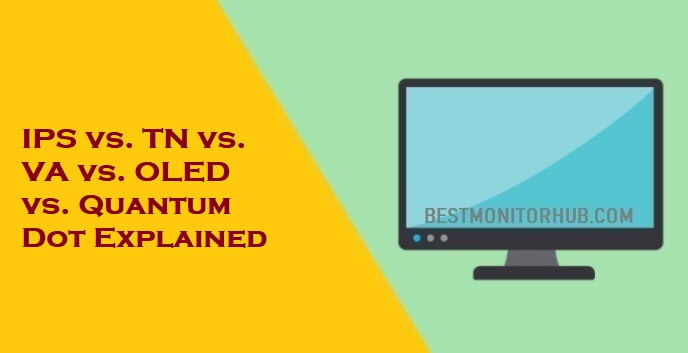 If you want to explore the world of monitor types, then you are at the right place. Here we have explained every type of panel along with all the details that you will need. Beginning from IPS, TN, VA, OLED to Quantum Dot, below you’ll find anything and everything about I. Be sure to read till the very end to make sure you know what to do if you ever need a display in the future.

Let’s learn more about that-

The first and the most common display position are taken by LCD and mostly everyone is familiar with it.

LCDs quickly impressed the market and became a favorite. This was because, unlike CRTs which used vacuum tubes, electron guns, and phosphorescent screens to produce images, liquid crystals change the light to achieve the desired color in LCDs. To create a picture, these crystals are backlit with some kind of illumination, such as LEDs. LCD displays are often referred to as “flat screens” because of their physical look, which is flat and light, unlike CRT monitors that were huge and bulky.

There are many types of technology that facilitate the use of LCDs. TN (Twisted Nematic), IPS (In-Plane Switching), and VA (Vertical Alignment) are the most common varieties out there. Let’s talk about all of these now-

Starting with One of the most popular LCD display types, i.e., is TN, or Twisted Nematic.

TN displays are common because they are inexpensive and are commonly considered to be “quick,” meaning they have fast response times and minimal input lag. TN screens usually have a fast refresh rate (100Hz, 144Hz, etc.), making them suitable for players who prefer the least amount of delay throughout their monitor.

Although TN displays are attractive due to their low cost and low latency, they are not without flaws, which include poor viewing angles and color accuracy. The only way to spot a TN panel is to look at it from a different perspective, either vertically or horizontally. The colors can be a bit off or totally blurred out, depending on the nature of the TN panel.

TN takes an upper hand when it comes to response time, which is faster, but the downside is the color accuracy is low and the viewing angles just make the color and display bleed.

Although IPS displays have the perfect color replication and viewing angles, they are still the most expensive and have a lot of lag and slower reaction times. As a result, gamers have historically avoided these displays because of the higher latency, which can cause ghosting and motion blurring.

But furthermore, emerging innovations such as S-IPS (Super-IPS) have greatly decreased the latency and reaction times of these displays, making them much more suitable for gaming than before.

Let’s now compare IPS displays with the other available models.

IPS vs. TN: While IPS has a slight advantage in terms of color accuracy and viewing angles, the faster response time is a deal-breaker. However, TN displays are faster and have a great response time.

IPS vs. VA: again, IPS having a little bit better color accuracy takes the lead here, but this also depends upon the panel and viewing angles. Different panels of IPS may also have a slightly lower response time and this is where VA proves to be a bit better.

As you can tell, each type of display has its pros and cons.

The last type of LCD is VA displays or vertical alignment displays. These displays are in between TN and IPS displays and balance everything out.

VA displays are normally less expensive than IPS displays, but they also have decent viewing angles and color accuracy. Even so, they are not as great as IPS displays, which is why most professionals choose to use IPS displays.

The biggest problem with VA panels, like IPS panels, is that they have a high lag, which can cause ghosting effects on the computer, resulting in a disappointing gaming experience. VA screens, on the other hand, are an ideal choice for those that want completely accurate colors, a clear image, and better viewing angles but don’t want to pay the full price of an IPS monitor.

To compare VA panels with the other panels:-

VA vs. TN: VA has a higher response time, making TN slightly preferable for gamers, but it has much better color accuracy and better viewing angles.

Now let’s talk about VA vs. IPS: VA lacks color accuracy when compared to IPS, but has similar viewing angles. Lower or faster response time also depends on the panel.

Now that everything about LCD is clear, it’s time to talk about Quantum Dot.

Quantum Dot, as seen in today’s displays, is not an LCD display technology, but instead a separate method of backlighting that improves color and consistency.

Rather than using a blue backlight covered with a material to turn the backlighting white, Quantum Dot screens use small particles capable of converting light to change the backlighting. Quantum Dots are much better compared to LEDs because it is difficult to coat LEDs precisely and to provide ideal uniform light production. They can also be individually adjusted to produce the best white light output.

In the monitor community, it’s fast becoming a new fad.

Brand new display technology is used in OLED displays. This technology allows each OLED pixel to produce its own light, eliminating the necessity of backlighting that LCDs require.

This enables each pixel in an OLED display to be switched entirely off, allowing it to show fully dark blacks, which is difficult with an LCD because the backlight is still on, and the display is presenting a completely black image.

OLED monitors are still uncommon on the market, with most of them being used in laptops and smartphones. Hence, little is understood about how a production OLED monitor would work.

Similar to older plasma TVs, OLED has been known to “burn-in” pictures. However, if more OLED displays become available, this issue could be overcome over time.

OLED displays, including IPS and VA displays, are supposed to have decent color reproduction and viewing angles in the future, although they may have some latency problems.

TN vs. IPS vs. VA Conclusions

Now we have reached the end of the display battle. As discussed above, no panel is perfect. Each one has its shortcomings and upper hands.

Also, it’s important to choose a display according to what work you carry out. For instance, gamers will want a fast monitor with low response times, thus going with either a TN or VA display with low latency and high refresh rate; whereas, creative professionals such as graphic designers, artists, video makers, photographers, etc. will likely want to stick with a IPS or VA display with the capability of displaying the widest color gamut and best color accuracy. And if general work is considered, then any panel type would suffice.

There’s currently no technology that is superior to everything else available in the market. So the only thing you can do is choose a panel that serves your purpose in the best way possible. With all the information given above, you probably have already decided what to choose. This was all from our side. We hope you found this information useful.