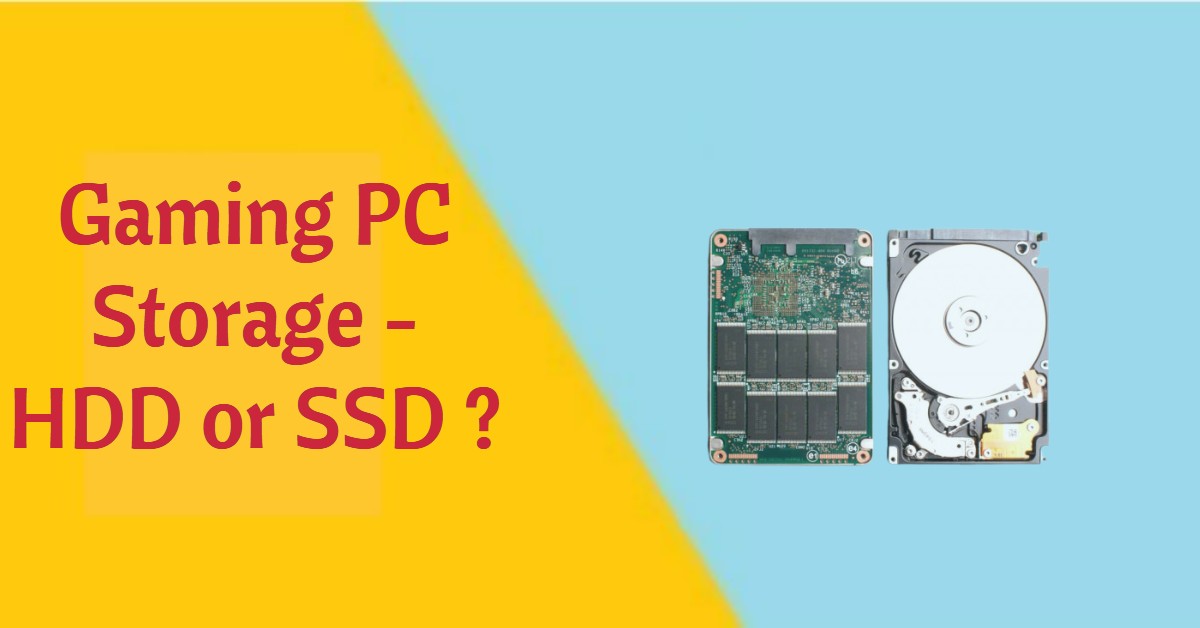 Historically, storage capacity has been a critical factor when it comes to game design. Expanding the storage capacity in the early arcade, PC and console games meant stacking up more and more floppy discs or RAM chips, which increased the production costs and reduced the profit margins for the game developers. As a result, game designers developed some resourceful ways of leveraging the little they had with innovative programming and graphical tricks.

And although the migration from the floppy discs and RAM chips to CD-ROMs relatively improved things, the pre-rendered graphics and slapdash video often had little to no impact on the overall gameplay. Since then,  PCs have had big jumps in terms of storage capacity, with HDD and SSD being the main storage mediums. And although both works as good storage mediums, the technologies between the two are completely different. This is why professional gamers use a mixture of both.

This begs the question: Which one is the best between HDD & SSD for gaming? In this article, we are going to break down the advantages of HDDs and SSDs below.

When comparing SSD vs. HDD, the main difference the first thing to consider is the price. Depending on where you purchase your storage medium the best SSDs can cost 9 cents per GB or more, with HDDs starting at 7 cents per GB. From this comparison, it’s clear that the old-fashioned HDD is relatively cheaper compared to the SDD, although you get to enjoy faster booting and applications launch speeds.

Another key consideration when choosing HDD vs SSD is performance. Typically, Solid State Drives (SSDs) use flash-based memory to store data, meaning they have zero moving parts. Along with that, they have faster read/write speeds compared to HDDs and less latency, which makes them costly per gigabyte of storage.

Hard disk drives (HDDs), on the other hand, use spinning magnetic media to store data, and it is accessed by an actuator arm just like the one found in a record player. And unlike their SSD counterparts, HDDs have slower read/write speeds and higher access times, hence their lower cost per gigabyte of storage.

Both Solid State Drives and Hard Disc Drives come in three primary form factors that you can choose from. They include;

Both PCs and laptops have an HDD and SSD standard form factor of 2.5-inch, and it snugly fits inside the drive bay. Still, they’re optimized to ensure you don’t have to replace the connecting interface cables, making it a piece of cake to upgrade to a higher-performance drive.

This is the smallest SSD form factor, and you can attach it to the motherboard using an M.2 socket. Along with that, the miniature size of the M.2 SSD means they can easily fit in ultrabooks and tablets.

This category of drives lets gamers store their games in a centralized system and even play on multiple devices, even when on the move. Instead of deleting some or all your games to create more space, you can move them to these portable drives. This is also important when looking to hire a professional booster to help level up. And talking about leveling up, check out how Destiny 2 infamy boost works.

Both Hard Disc Drives and Solid State Drives are optimized to make your gaming experience seamless. Most modern HDDs have a capacity range of between 20GB and 180GB, which is enough to store most modern games without impacting performance speeds.

Unlike HDDs that come with a spinning platter and an actuator arm, SSDs do not have any moving or spinning parts, making them less susceptible to damages. As such, they can handle unexpected bounces and falls and still retain the integrity of your games and other important files.

Along with that, they’re designed, tried, and tested to ensure they’re vibration-resistant, making them ideal for gamers who travel frequently.

In the noise department, SSDs stay relatively cooler compared to hard drives, meaning the fan operates under ideal speeds. This eliminates the humming noise that comes from an overworked fan, allowing you to enjoy a quieter gaming experience.

Unlike the HDDs that access information via the spinning platter, SSDs use flash memory to access data, reducing temperature spikes.

The fact that SSDs don’t have any moving parts means their energy consumption is significantly lower. As such, playing games on a laptop fitted with an SSD means less energy consumption, which ultimately helps extend the battery’s lifespan.

There you have it! The factors to consider when choosing a storage option between HDD and SSD for your gaming needs. We hope that this article has cleared up everything you need to know between the two storage mediums. If you’re looking for an affordable storage medium then you’ll be better off choosing HDDs, although you’ll have to sacrifice the improved read/write speeds that come with SDDs. alternatively, you can pair a Hard Disc Drive and Solid State Drive, and enjoy the best of both worlds. Ultimately, your choice will be determined by your budget, system capacity, and gaming needs.