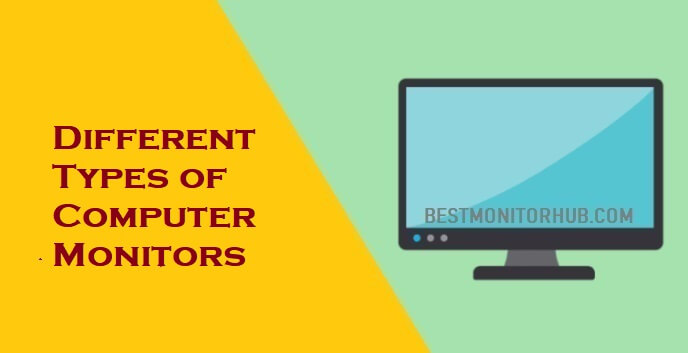 The monitor is the most important part of any computer. It is like a digital window that makes everything possible, be it work, entertainment, or just study. After the CPU, a monitor is something that is the essence of every processer and needs detailed attention.

Let’s get to the list of all the monitors without any delay.

Further down 8 different Types of Monitors are listed to simplify things for you. All these monitors are described in detail and are recorded in a way that ranges from simple to complex.

Make sure to read till the very end of this article so that the next time you purchase any monitor you will be well versed about the features as well as disadvantages of the device.

First, let’s start with the basics of it all; so everyone knows what a monitor is…….

The monitor is commonly referred to as a display, and its sole purpose is to enable the user to communicate with the computer. 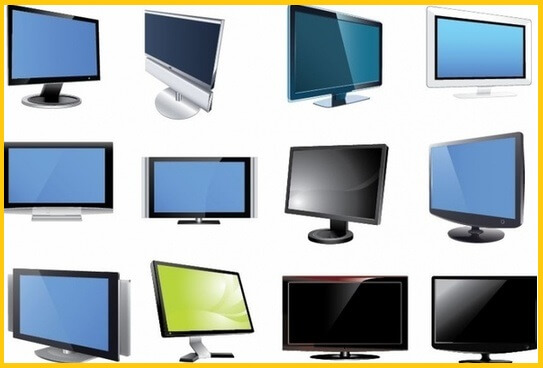 The video screen is any computer’s digital output system over which images and texts created by a graphic or video adapter are portrayed.

As discussed above there are generally 8 different types of displays.

Let’s discuss all these monitors in detail-

It was the technology that was used in the earliest displays, something you’ll still remember because they were the first ones to transmit black-and-white images.

The period of black and white, however, was short-lived. As the corporations wanted to add colors for a greater understanding of the context, much of which was accomplished by the use of phosphorus-fused tubes and a cannon, owing to which the image was transmitted and displayed in colors that were fairly more colorful than black and white. 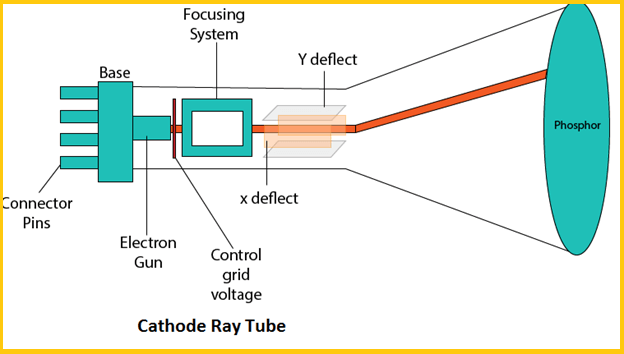 The CRT in its name stands for Cathode Ray Tubes, which use electrons to transfer the image they collect through an antenna; moreover, these were the first prototypes used by the industrial sector; thanks to its strong materials and rugged proportions.

LCD is the abbreviation for Liquid Crystal Display, which is one of the most well-known names in today’s world. It has a thin frame and operates with a set of monochrome pixels that are formed by light.

While LCDs were originally designed for the television industry, their technology is now used in a diverse variety of home appliances, where it is extremely useful, like calculators with LCD screens for instance. 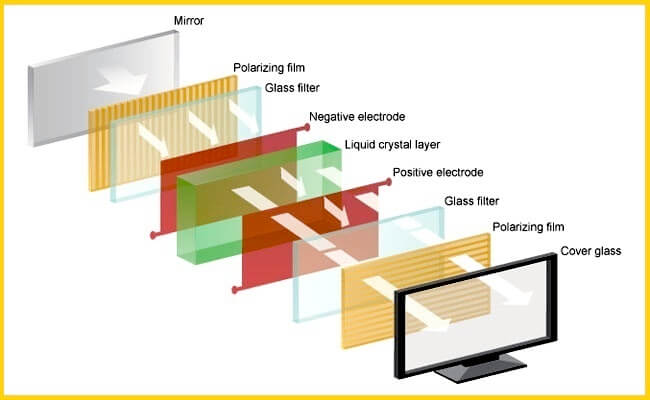 This form of the display has a minimum resolution that ranges from 1280 x 720 pixels to 3840 x 2160 pixels. The image’s reaction time is much like the time it takes for a pixel to change color, making it one of the most widely used technologies on the market.

1. They do not require higher energy consumption, so their use will help you reduce certain amounts of the electric service bill.

2. These are lightweight so they can be hung on the wall, generating clear and colorful images

3. Their sizes are moderate- these monitors tend to occupy very little space and are accommodating and combinable with any space in the home or office where they will be installed.

4. They are widely available in the market and are quite affordable.

GH (Guest Host): GH is a light-absorbing pigment found in liquid crystals. This mechanism occurs at different levels depending on the strength of the applied electric field. This allows you to work in a range of colors.

It is a kind of LCD television that is dependent upon the size of the display; it enables the incorporation of other components. The bigger the screen, the clearer the picture, which is to be projected. The picture is accurate and not pixelated. Which is the consequence faced whenever the screen does not have the appropriate resolution to translate that image.

This technique is focused on the use of transistors for each of the screen’s pixels, allowing for greater magnification and illumination of the image: it’s an innovation that integrates liquid crystal with high resolution.

Let’s talk about the other most popular display available in the market- LED.

This type of screen is composed of light-emitting diodes or LEDs. Its name LED stands for Light Emitting Diode.

These panels are monochromatic or polychromatic LED modules that enable a PC consumer to display data and pictures. They are created of RGB LEDs that shape the screen’s pixels. These displays have a minimum resolution of 1024 x 768 pixels. 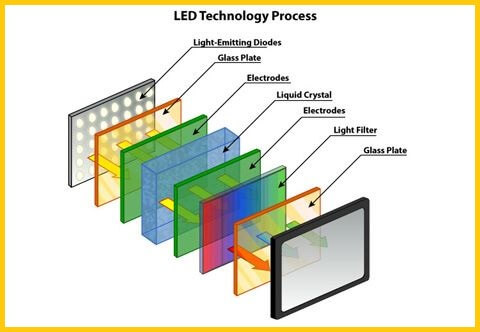 1. Capable of projecting the image with a high level of dynamism and clarity.

2. Screen projects the transmission of a high-resolution image that can be perceived at long distances

3. Presents a preview of the picture that is bright and colorful, so authenticity is valued.

Now that the concept of LCDs and LEDs is clear to you, let’s talk about their differences and compare them.

LCD and LED displays to have specifications that are similar in some ways and different in others.

You don’t know the difference between the two if you’re just a regular computer user without any special imaging needs. They do, however, have certain differences, as shown in the comparative table.

One aspect is certain: if you have a huge bulky CRT display on your desk these times, switch to an LCD or LED display, since they all deliver smaller, lightweight models and are energy-friendly, so the money you pay on one of these two styles of displays is money you actually will save on your energy bill.

It’s a display of perhaps the best resolution available right now. It functions based on digital micro-mirror units or DMDs. The light is digitally modulated by millions of micro-mirrors in these types of displays. 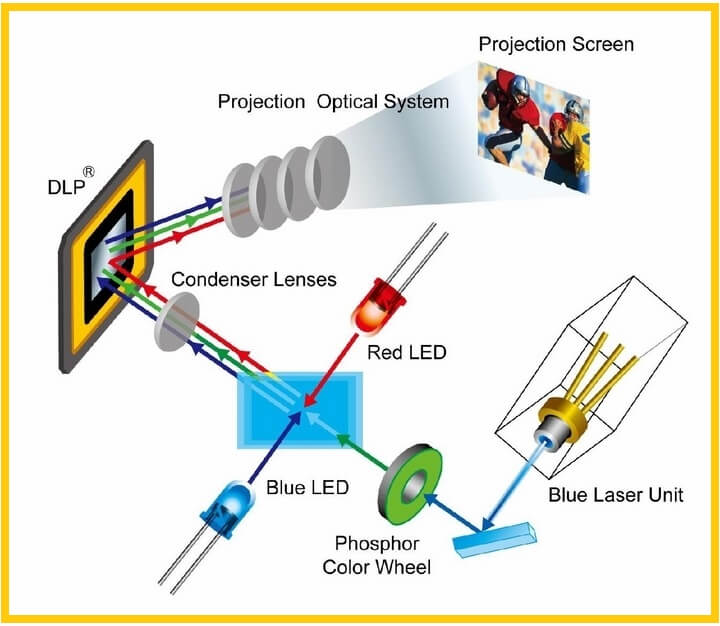 To send this light into a pixel’s domain, these tiny structures operate together. They will generate 1024 gray scales in this manner, making it a perfect screen for those who choose to play video games or focus on image and video processing.

The touchscreen display is super popular and everyone knows about it. It’s widely used in smartphones and tablets.

Its design is responsive enough to allow dragging choices on its top, making graphics and design programs easier to use. There are also partial touchscreen devices that can be connected to LCDs or LEDs to make them interactive.

This model monitor processes in the same way as the incredibly common electronic smartphones and tablets. To access a menu or perform a certain operation you can simply tap the screen. 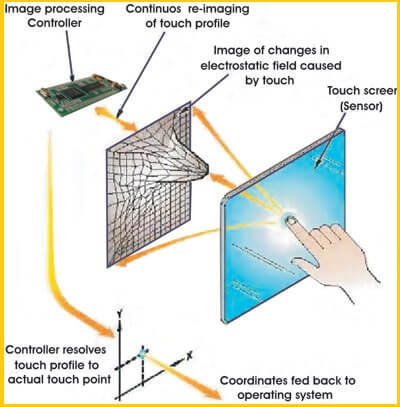 Touchscreens have been famous for use in business applications, public computers (such as museum displays, information screens, bank ATMs, and so on) where keyboards and mice do not enable such a functional, efficient, rapid interaction.

There are ATMs (touch screen ATMs) where users can insert account details, select the type of transaction they want to make, and so on.

Currently, some touchscreens can be installed on a normal screen, of any type (LCD, monitors and televisions CRT. plasma, etc.)

They get their name from the fact that they have cameras or fluorescent sheets inside that allow for a big picture and excellent color. but plasma screens occupy a large space, being appropriate to adapt to the walls to keep them well supported. 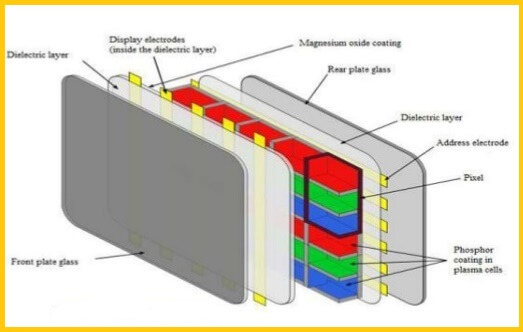 Its key feature is the balance it maintains between the image’s brightness and contrast; the better or stronger the balance, the finer and higher the image’s resolution. 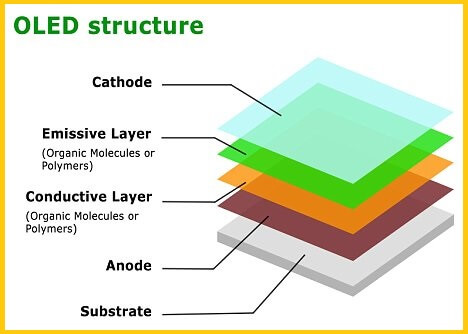 An electro-luminescent layer made of organic components works with light emitted from within the thin structure. This is how computer-generated images are created. When these panels are switched off, they become translucent and can even be bent, which is very fun. It can have 360-degree or 3-dimensional images.

This was all about monitors and their types. We hope that this was helpful to you and the next time you buy monitors please keep all this necessary information in your mind.

Let us know if you found this helpful and what else you’d like to learn about!