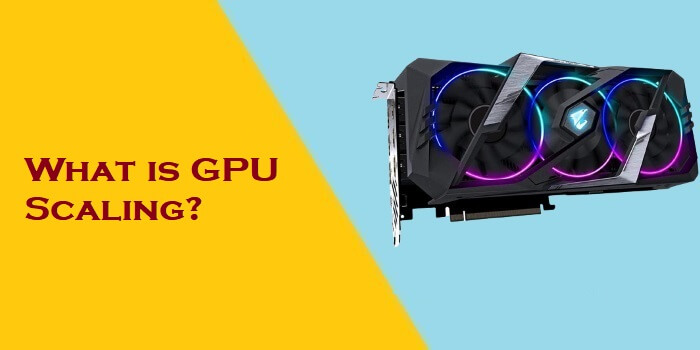 GPU is an abbreviation of the graphics processing unit. It is an important computer technology that’s beneficial for both personal and business purposes. To understand the concept of GPU scaling, first, it’s important to know what GPU is. So let’s start with that first –

The GPU is just a computer processor that is concerned with creating on-screen graphics in order to make photos and gaming more enjoyable and entertaining. With technological advancements, almost everything is now feasible, and enhancing graphic output on your computer is just a minor challenge. Every pc user wants the best show quality possible to improve their graphics and double their gameplay experience.

GPU scaling is a technological function that assists in the generation of high image output. It helps you to adjust the aspect ratio of a game depending on the resolution of your display, giving you the experience of fine-tuned graphics and image output regardless of the monitor resolution.

Former games, for starters, which were developed for displays with lower aspect ratios of 5:4 or 4:3 can stretch the images on a 16:9 screen environment, resulting in distorted, fuzzy, and very weak image quality. GPU scaling will save the day in this particular circumstance; it scales the images and accurately matches them both vertically and horizontally on the screen without pixelating the photos.

A majority of gamers use AMD graphics cards, in which event they must change from AMD, other manufacturers support GPU scaling.

Now that we have discussed GPU Scaling. Let’s now talk about all the steps that will help you enable GPU Scaling in diverse models of screens and why it is required.

What is GPU Scaling? – Everything You Need to Know

Why do you need GPU Scaling?

Most gaming fanatics are into indie or old-era games that usually run in a 5:4 or 4:3 aspect ratio or applications and might be using a 16:9 or 16:10 screen. But it’s evident that the overall graphic output of such game images is of very poor and pixelated quality.

Suppose you’re watching a basketball game and the point guards appear very much like defensive players on a football field instead of an integral part of the game. Wouldn’t that be infuriating? This is where GPU Scaling comes in; it changes the aspect ratio of the picture so that it looks decent on large screen screens and displays.

GPU scaling is indeed very essential in this case since it adjusts the aspect ratio based on the display size. It corrects any variation in the aspect ratio, which is an image’s width compared to its height, in images produced by software applications and games; then changes it based on the screen’s resolution to create a seamless display.

GPU scaling is not just one type or two types; it comes to rescue your pixelated display in three amazing modes. Keep on reading to learn about different modes of GPU scaling.

In short; there are three different modes in GPU Scaling that aid us in adjusting the display via AMD Catalyst or AMD Radeon Graphics.

This setting allows you to play your favorite game on your display; however the blurred and reduced screen output can be distracting and unpleasant to the eyes. This mode may cause the monitor to appear strange because it expands the picture to cover the entire frame, resulting in poor image quality and weak graphics also because the game’s original aspect ratio is not maintained as it should have been.

The second mode of GPU Scaling is also favorable to gamers because it does not alter the aspect ratio and disables scaling by displaying the image’s original screen size in the middle of the frame. This is especially helpful where the picture is smaller than the size of the display. The blank border is covered with black lines or a background design.

Preserve aspect ratio, as the title implies, helps you to view the finest graphics by maintaining the true aspect ratio. It does not change the aspect ratio, but simply applies black bars to the upper and lower part, or right and left, of your monitor to fill the extra space.

How to enable GPU Scaling?

After learning about all these advantages you’d surely want to enable GPU scaling. If you do then keep in mind that if you want to enable GPU Scaling within the Radeon Settings then, there are few conditions that you’ve to satisfy-

If all these requirements are fulfilled, then this is how you can enable GPU Scaling!

That’s it! You are done! You have now enabled GPU scaling.

Can we remove the black bars?

When you are done with GPU scaling you might not like the black bars that appear after it’s done.

Because of the mismatch between scaling and the GPU method of analyzing the picture, these black bars appear all around the image to cover up the excess context.

It is not possible to fully remove these black lines from your monitor, but there is still a feature in GPU Scaling called UNDERSCAN/OVERSCAN that can change the image accordingly to get improved results.

Here’s more on that-

So what is Underscan/Overscan? Basically, it is just an option that can be found in the alignment menu of most GPUs. Now this option might not have the same menu name as it varies from GPU to GPU but the purpose it serves is the same. . The feature Underscan/Overscan provides the user with a proper view.

If you attempt to use a traditional 4:3 or 5:4 aspect ratio on a new display with a more popular aspect ratio, such as 16:9, a lot of misalignments are bound to happen during the process of your GPU analyzing and scaling the image. As a consequence, black bars cover the image on both sides, and the image is often cut off when it extends past the screen’s borders. The Underscan/Overscan option can be included here because it helps you to change the picture scale for a more relaxed view. You can resize or expand the picture to make it fit perfectly on your display. So by doing that Underscan/Overscan really makes the GPU scaling appear neater.

Are there any cons of using GPU Scaling?

Even if GPU scaling is super helpful it still has some down comings.

Let’s get one thing straight- GPU Scaling is for older games; there is no need to use this option for the new games. If you use it for new games it might do more harm than good. Many times it can create unnecessary performance issues in your game, the most popular of them all being- input lag.

Input lag isn’t just a problem with newer games; it’s also a struggle with games that use regular 4:3 or 5:4 aspect ratios.

For those of you who aren’t familiar with the term of input lag, keep reading to find out –

Input lag is the time lag that occurs between the resulting on-screen movement and pressing the button during a game or film. It interferes with the ability to act or play quickly in the game, as well as the smoothness of the film.

While this takes just a few seconds and is unnoticeable in videos, it can be very visible when playing a game and affects your gaming results. Using the GPU Scaling function necessitates further computation, resulting in a small input lag.

It’s a tough selection that you have to make and choose between the two- Input lag or not scaling the image?

Input latency is different for different computers. In the best gaming monitors for example those that are used for professional gaming, you can see the least amount of input latency.

The second most common drawback is that sometimes display scaling may be favored over GPU scaling. This happens when it comes to measuring the lower-than-native resolution performance in games.

That was all about GPU scaling. Let’s move on to the conclusion now.

Now that we have reached the conclusion, it’s pretty clear the GPU scaling really improves the performance of old games and displays them in the best way possible. Higher resolution and better graphics make the images more vivid and realistic, providing an immersive experience.

But then again it’s too good to be true and that’s where black bars and input lag come in. they might be disturbing to some users but you’ll have to make your peace with it if you want a better screen experience.

GPU Scaling isn’t essential for modern games, for these games is pointless as it will just create more input lag and will affect your gaming performance. You might even observe that GPU Scaling is self-disabled for games that don’t need it.

But GPU Scaling works wonders for all your favorite old games and just by making a few minor changes you get the desired fit on the screen along with neat and clear images.

Now it is your call to choose between clear and vivid gameplay or black lines and input lag!

If you really think that GPU Scaling is useful for you, do turn it on by following the procedure above and if not then there are many other ways that you could use to boost your gaming experience with old age games.

We hope that you found this all helpful. Do leave comments, feedbacks as well as suggestions down below.