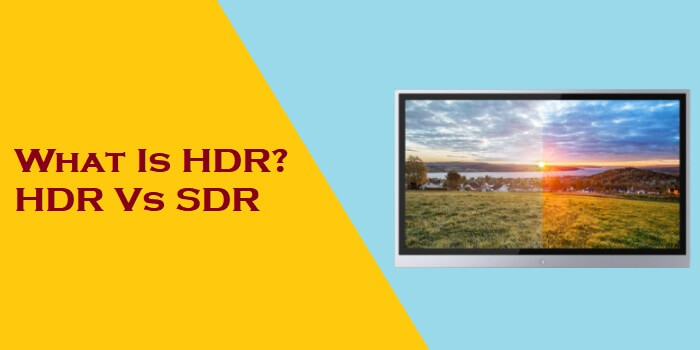 Many times while taking pictures you might have noticed an icon displayed in your phone camera that says HDR, but have you ever really used it? And what is its function?

Well in this article you’ll learn everything about it. So keep on reading to discover the world of high dynamic range aka HDR.

High Dynamic Range (HDR) is the next age modification of color clarity. It displays realism in images and videos. HDR conserves the clarity of any image better than Standard Dynamic Range (SDR). It’s Ideal for media that necessitate high contrast, shadows, and mixed light.

Various terms have the suffix “high” like- High definition, high security, high speed. So what is ‘high’ anyways? High simply indicates elevation “to the next level”.

The same is the case for High Dynamic Range (HDR). That means elevated or better dynamic range. Overruling the standard dynamic range of SDR, HDR has attained more and more popularity in recent years.

However, since HDR is still a relatively young technology, several people are clueless about how it operates. But chances are you’ve learned of High Dynamic Range (HDR) and how it’ll boost your viewing experience “to the next level.”

What Is HDR? HDR Vs. SDR: Everything You Should Know About

So, let’s talk about what HDR exactly is? What’s the difference between HDR and SDR? What would it change in the future?

Here’s an HDR vs. SDR comparison guide to answer these budding questions. Further down read about how HDR operates and why it’s becoming so popular. 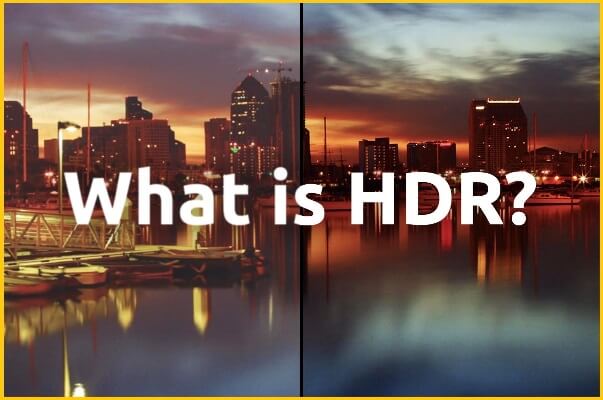 HDR is a form of photography that records, processes, and replicates imagery in such a fashion that both the shadows and highlights of a scene provide far greater detail. Although HDR was once only used in conventional imaging, it has recently found its way into smartphones, TVs, monitors, and other devices.

So what is this going to change?

As compared to SDR (Standard Dynamic Range) images, using HDR means that images have more overall detail, a larger range of colors, and appear more like what the human eye sees.

Dynamic Range on Your Monitor

Hues and information in an image are often “trimmed” as a function of the monitor’s display capability, mostly because it has a poor contrast ratio or does not work with HDR. As previously said, all information that has been trimmed is damaged and thus cannot be shown. This issue is worsened when a monitor attempts to generate an image with a broad spectrum of brightness.

HDR addresses this problem by measuring the amount of light in a given scene and uses that knowledge to conserve specifics within the shot, including the scenes with significant differences in brightness. This is accomplished in an attempt to produce more realistic-looking shots.

SDR, or Standard Dynamic Range, is the current video and movie projection standard. Unfortunately, it is limited to representing just a fragment of the dynamic spectrum that HDR is capable of. As a result, HDR protects details in scenes where the monitor’s contrast ratio would otherwise be a major obstacle. SDR, however, is deficient in this region.

Needless to say, by contrasting HDR vs. SDR, HDR helps you to see more clarity and color in high dynamic ranged scenes. Another distinction between the two is the inherent measurement.

For those of you who are acquainted with photography, dynamic range is measured in stops, similar to a camera’s aperture. This represents that gamma and bit depth changes made in the image can vary based on whether HDR or SDR has been used.

Photos on a standard SDR monitor, for starters, would have a dynamic range of around 6 stops. HDR information, on the other hand, can almost triple this dynamic range, with an estimated total of 17.6 stops. As a result, dark grey tones in a dark scene may be trimmed to black, while in a brighter scene, certain colors and detail in that section of the scene may be trimmed to white.

considering HDR, there are two obvious standards worked in the present day, Dolby Vision and HDR10. We’ll learn about the differences between each of those below-

Dolby Vision is an HDR standard that necessitates displays to be specially equipped with a Dolby Vision hardware chip, for which Dolby receives license fees. Dolby Vision employs 12-bit color with a brightness limit of 10,000 nits. It is worth noting that the color gamut and brightness range of Dolby Vision surpass the capabilities of today’s monitors. Furthermore, owing to its unique hardware service specifications, there is a barrier for monitor manufacturers to enter because the implementation of Dolby Vision remains strong.

HDR10 has developed itself as the default format for 4K UHD Blu-ray discs; Sony and Microsoft have used it in the PlayStation 4 and Xbox One S, respectively. When it comes to computer displays, some models in the ViewSonic VP Professional Monitor Series include HDR10 support.

HDR10 is a more readily adopted standard that producers are using to avoid having to adhere to Dolby’s specifications and fees. HDR10, for example, employs 10-bit color and is capable of mastering material at 1000 nits of brightness.

If you own an HDR television, it’s an easy mistake to make. You will feel that all content is HDR content. Well, this is not the situation; not all content is created similarly! Here’s an example to solve your doubts-

For example, if you own a 4K television, you won’t be able to profit from the 4K details unless the content you’re watching is also in 4K. The unchanged goes for HDR, for instance, in order to enjoy it, you’ll need to certify that your viewing material supports such an experience.

HDR content is currently available in a variety of formats. In terms of streaming, Netflix embraces HDR on Windows 10, and Amazon Prime has already hopped on the HDR trend. In terms of physical content, HDR Blue-ray discs and players are available for purchase, in addition to the built-in players on the Sony PlayStation 4 and Microsoft Xbox One S game consoles.

Is your setup capable of displaying HDR?

After you’ve selected your HDR content, whether it’s an HDR video or an HDR game, you’ll need to ensure that your system is capable of viewing that HDR content.

The first move is to ensure that your graphics card is HDR-capable.

HDR can be viewed on HDMI 2.0 and DisplayPort 1.3 devices. If your GPU supports one of these ports, it should be able to view HDR content. As a general matter, all Nvidia 9xx series GPUs and newer, as well as all AMD cards from 2016 and later, have an HDMI 2.0 slot.

In terms of your monitor, you’ll need to ensure that it too, can accommodate HDR content. HDR-compatible screens must have a resolution of at least Full HD 1080p.

ViewSonic VP3268-4K and VP2785-4K are two examples of 4K monitors that support HDR10 content. Color quality is often taken into account in these monitors in order to ensure that on-screen images appear as realistic as possible.

Is HDR a good investment for the future?

It’s a known fact that technology is always changing [for the better].

for example, high-definition televisions did not become accessible in the United States until 1998 and were popular for five to eight years thereafter. But Today, Full HD resolution is commonly found throughout the country, with 4K UHD acting as the new unconventional option.

In-home videos, VHS became DVDs then Blue-Rays. As In music fields, vinyl records became CDs, which then became mp3s at last. In terms of televisual resolution, 480p was transmuted into 720p and 1080p over time. This clearly portrays how quickly technology changed and simplified everyday life.

The current modern battle between HDR vs. SDR mirrors the same movement. Even though HDR has been thriving in the photography world for some time, it is still a newcomer in terms of television and monitors. Some even argue that 1080p HDR looks better than 4K SDR!

Now that you have understood how HDR might change the game, you’re probably considering a dive to HDR, so

Is HDR a good investment? Will High Dynamic Range technology actually take off?

HDR technology is a good bet for all of its advantages.. At the moment, the underlying hardware is tightly linked to that of ultra-high definition resolution, commonly known as 4K.

Given the ease of use and rapid adoption of 4K by the general public, it stands to reason that HDR will follow suit in the future. We may debate HDR vs. SDR all day, but whether HDR is beneficial to you will largely depend on your perspective. For the time being, feel free to browse ViewSonic’s HDR-compatible ColorPro displays or delve further into the realm of color calibration and color grading.

Fortunately for the early adopters out there, HDR products are not difficult to find. The advantages of HDR apply also to gaming, enabling you to see more depth in your games for a more immersive experience.

We hope this gave you some much-needed clarity about HDR displays and how it’s changing the whole market of displays. To sum it up, we would like to say that we are a fan of these HDR screens and if you have made it till here then you probably are a fan too.

So remember all this the next time you come across that small HDR icon in the camera of your smartphone.